Have you ever taken someone on and then wished you hadn’t? You may be wondering if it’s fair or legal to dismiss them.

Most businesses will find themselves in this situation at some point.  However, many employers are too afraid to dismiss the employee in case they get taken to an Employment Tribunal.

Did you know there are six potentially fair and legally acceptable reasons for sacking a member of staff?

This blog sets out a summary of those reasons and, over the course of the next few weeks, I will address each of them in more detail.

Conduct in the workplace is one of the most common reasons for firing a member of staff.  For example, Dave is involved in a one off incident of gross misconduct, such as fighting or stealing.

Or Elaine might be involved in a series of less serious incidents of misconduct, such as persistent absence or refusal to obey instructions.

In either case, it is potentially fair to bring their employment to an end.

If Bill can’t do his job properly, for example he makes lots of mistakes, then this is a potentially valid ground for letting him go.

It may also be fair to dismiss Carole who is great at her job (when she’s in) but has far too much time off sick!

Redundancy usually means you don’t need as many staff as you used to.

For example, if Frances and Gary are in the same department and there’s now only enough work to occupy one of them, you may need to decide which one should be made redundant.

4.    Continued employment would be against the law

Helen is employed as a driver but has lost her licence. Meanwhile, Ian’s work permit has run out.

You can (and must) terminate their employment!

In most cases, retiring Jack just because he’s reached 65 will be deemed to be age discrimination.

However, there are very limited circumstances where it could potentially be fair. More of that in a later blog!

6.    Some other substantial reason

This sound like a catch-all to justify any dismissal. It isn’t.

It’s fairly limited in its scope but it can be used, for example, where there is a business re-organisation and Karen’s job role no longer fits.

Or it can also apply if you have a personality clash with Lionel, even though it’s not his fault.

Even if you have a fair reason for dismissing someone, you must follow the right procedure or the dismissal will still be unfair.  This could lead to you having to pay compensation to the employee.

Despite the fears of many employers, the law does allow you to dismiss staff, provided you get it right.

If you need help to manage a dismissal fairly, we can offer you: 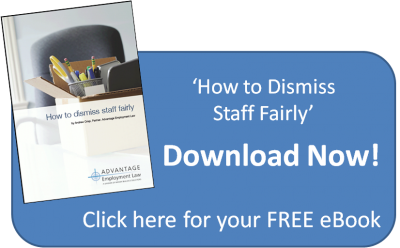 Previous Entry: Age Discrimination – Sometimes it’s OK!
Next Entry: Can You Dismiss Someone Because of a Personality Clash?
Trustpilot